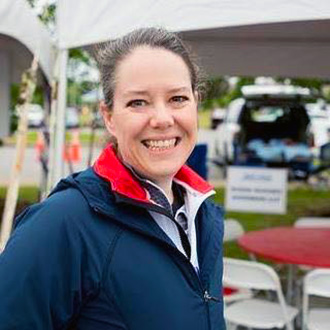 Margaret A. Morris Fears, Ph.D. lives in Norfolk, Virginia where she is Associate Professor of Internal Medicine and Director of the Biomedical Sciences Graduate Programs at Eastern Virginia Medical School. After completing the TAMS program in 1993, Dr. Fears earned a B.S. in General Biology from the University of Michigan in 1995 and a Ph.D. in Immunology in 2002 from the University of Texas Southwestern Medical Center at Dallas.

What brought you to the Texas Academy of Mathematics and Science (TAMS)?

TAMS offered a higher degree of academic challenge than that which I was experiencing in high school.  I was unhappy and unfulfilled in my traditional high school setting both academically and socially.  My high school was not supportive of early graduation, despite the fact that I would have qualified by attending summer school for one extra summer.  TAMS was not too far from home, and my mother was instrumental in realizing the magnitude of this opportunity.  Without her support, I would not have attended.

What did you enjoy most about TAMS?

I really enjoyed my entire TAMS experience.  At TAMS, I finally found "my people.”  While we had our groups, there was not typically malicious behavior within or across groups.  I was definitely challenged academically and loved the atmosphere at UNT.  I am still very close to many friends from TAMS and have enjoyed that connection for over twenty years now.

How did your experience at the University of North Texas (UNT) and TAMS shape your career path?

Had I not gone to TAMS, I would likely not have left Texas for my undergraduate degree.  I am not sure that I would have discovered my calling in academic medicine had I not left Texas.  So, TAMS played a large role in directing my career path.  I have to give credit to the academic counselor for sharing her love of the University of Michigan.  That was not an institution that would have been on my radar otherwise.

I believe the most valuable lesson I learned was that it was okay to be myself.  I was struggling with my identity in traditional high school, but at TAMS, I could be nerdy.  I could speak with my peers using my natural vocabulary (instead of dumbing my speech down).  I could like classical music, chemistry, biology, and English.  Certainly, it is a journey to find oneself, but TAMS offered the first real opportunity for me to start that journey.

If you earned a bachelor’s degree, what did you do in the year immediately after graduation?

I took a year off after graduating from the University of Michigan. I worked as a Research Technician at University of Texas Southwester in Dallas. I do not regret this at all, as it was part of the journey I started at TAMS.  It really gave me time to slow down and experience life a little. This time for me was somewhat dictated, as I had not gotten into medical school. However, the year gave me the chance to see that medical school was not really where I wanted to be.

I strongly recommend taking a year off to undergraduate students that I meet, especially if they are unsure about their path.

One memorable moment? I don't think that's possible. We had the dances, the plays, watching Monty Python, late nights studying.... I have so many precious memories from those days. One I think about frequently is Dr. Donahue's "Scoff! It's a phospholipid bilayer!" Since I work in a field that thinks about those bilayers, I always will remember him saying that.

TAMS was family.  UNT was the extended family, and Denton (at the time) was a relatively quiet place where there weren't too many distractions off-campus to prevent academic success.  It was a great college town that had enough to do, but not too much.

If you could go back and do it all again, would you still attend TAMS? What would you do differently, if anything, during your time as a student?

I would definitely still attend. I'm not sure I would get in at this point!  Since I was in the fourth class, we were still in the early days and the program was not as widely known. I think the competition is much more fierce to get into TAMS now. I really can't think of anything I'd do differently outside of trying to get into research while at TAMS. I was restrained by a knee injury between my junior and senior year, so I could not do summer research.

I was recently appointed as the Director of the Biomedical Sciences Graduate Programs at Eastern Virginia Medical School. I have a steady track record in terms of scientific publications, and I am developing an international reputation in my field of the immunology of Type 1 Diabetes.

One of the most important things you can do is gain research experience.  I recommend taking every opportunity possible to do this, and it's especially useful to spend more time in one lab, rather than pursuing lots of different projects in many different labs. Also, don't try to rush to the end goal.